The Universe as Meaningful* 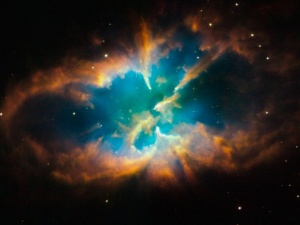 Anxiety is as old as mankind, contemporary man suffers from an anxiety that is specific to our age and that is somehow bound up with the rapid rate of human progress. Conscious or not, a fundamental anguish of being, a general anxiety of existence, strikes deep inside all men today. Something threatens us, something more than ever is lacking, but without our being able to say exactly what.

It is, more than fear of the future or fear of the death of the individual, the fear that there will ultimately be no future, the fear of the total death of mankind. What distinguishes modern man is his consciousness of evolution. What causes his anxiety is not being sure that there is a suitable outcome!

For Teilhard de Chardin modern man’s most pressing psychological need is an assurance that some successful outcome exists for progress on earth for which he knows himself to be responsible. Unless such a guarantee is given, that is to say, unless the prospect of a total death ahead can be eliminated, then there is serious danger that progress will flounder and the whole human enterprise come to a halt!

“This is the threatening reality we and our children are facing today”
[Paul’s comment].

Teilhard tries to show that there is such a guarantee, that the world around him is meaningful, and that human endeavor does have a lasting value. He does this at two levels, at the level of an objective study of the phenomena (with the selection and arrangement of data to form an ordered series of increasingly comprehensive general hypotheses) and at the level of theological reflection. The first step in his effort to give his contemporaries a vision that is an assurance that the world is meaningful and that man’s endeavor has a lasting value is his generalized physics, or scientific phenomenology of evolution.

At the heart of Teilhard’s phenomenology of evolution is a law that he finds constantly recurring in the world of our experience, the law of complexity-consciousness. According to this law the universe is in movement, in evolution, toward ever more complex material arrangements and correspondingly higher degrees of consciousness. Having passed through the critical points of the appearance of life and the dawn of reflexive consciousness, evolution continues in man, advancing to still more complex arrangements through technical achievements and socialization and to still higher degrees of psychic tension, of consciousness.

In this perspective, evolution is seen to be convergent; that is, it has an upper limit, an interior point of maximum development of complexity and consciousness. Evolution, then, has become conscious in man; it continues in and through man in the direction of a focus of convergence that Teilhard calls the Omega point.
Since evolution is reflective and free in man, Teilhard argues that it must be not only convergent but also irreversible; evolution now conscious could not continue without some assurance of escaping annihilation or total death. The demand for irreversibility implies the existence of an Omega point that is a transcendent center of unification.
This, in summary form, is Teilhard’s phenomenology of evolution, a kind of generalized physics of the universe in process. It is a general hypothesis of the evolutionary structure of the universe, a dynamic hypothesis in the sense that it opens out to further investigation, to further refinement.